A special event featuring the screening of the film Little Star Rising by Slađana Lučić followed by a debate entitled “Break your own walls”, in the presence of the protagonist Nudžejma Softić and Caroline Mohr Larsson, a motivational speaker and former golf professional from Sweden.

Little Star Rising is a feature-length documentary about a young woman whose first memories are those of walking in front of a tank with her mother and sister, banished from the village where she was born. Nudžejma put her running shoes on at the age of 28 and by the age of 30 became one of the first women to run a marathon in Europe while wearing the hijab and the first European woman with a head covering to compete in the IronMan triathlon. She is the sort of person whose first thought will always be how to put a smile on your face and who can always remind you of the fact that it doesn’t matter where you come from or what cards have been dealt to you, what matters is what you do with them, because You are the one who has the power. She is determined to change the game of life for the better for anyone who is willing to make an effort.

The debate which will follow the screening will focus on the boundless human capacity to overcome difficulties and find inner motivation to live and win, regardless health issues, social barriers or political situation. The main objective of the event is to inspire women and help them find their strength and motivation to become a force for positive change in their communities.

The debate will be moderated by our colleague Martyna Adamska, who organises similar events and various workshops for women. 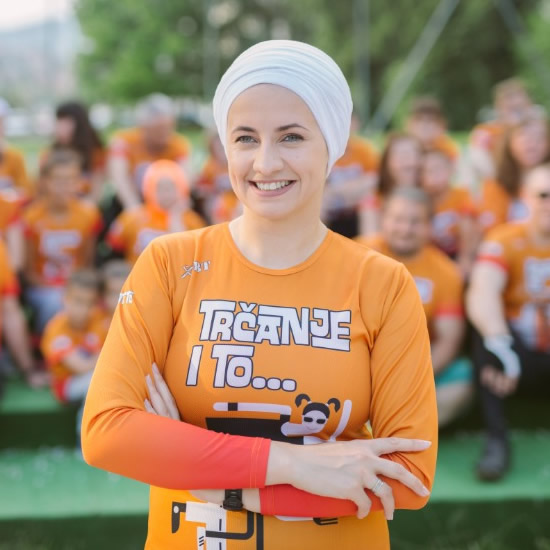 Nudžejma Softić has been a proof reader for Al Jazeera Balkans international news television station since 2012. She is a triathlete and the founder of the “Trčanje i to” ("Running and Stuff") Association of Recreational Athletes and of the first Bosnian-Herzegovinian Green Lake Triathlon. Nudžejma has recently also been dedicating part of her time to working as a PR Specialist at Sarajevo Toastmasters Club. Nudžejma's lust for life, inspiration, strength, ability to overcome personal fears, focus on creating and living a better life and positive influence on the people around her inspired Slađana Lučić to direct her first documentary film titled „Little Star Rising“.

Caroline Mohr is a motivational speaker and former golf professional from Sweden. Her story of surviving a nature disaster, cancer, losing her leg and making an incredible comeback is a great example of our potential to grow through challenges. Caroline has featured in media around the world and spoken to big global business in 10 countries. She inspires her audience to grow, by sharing unique strategies for building strong mental muscle, becoming resilient and finding out how to get the most out. of life.